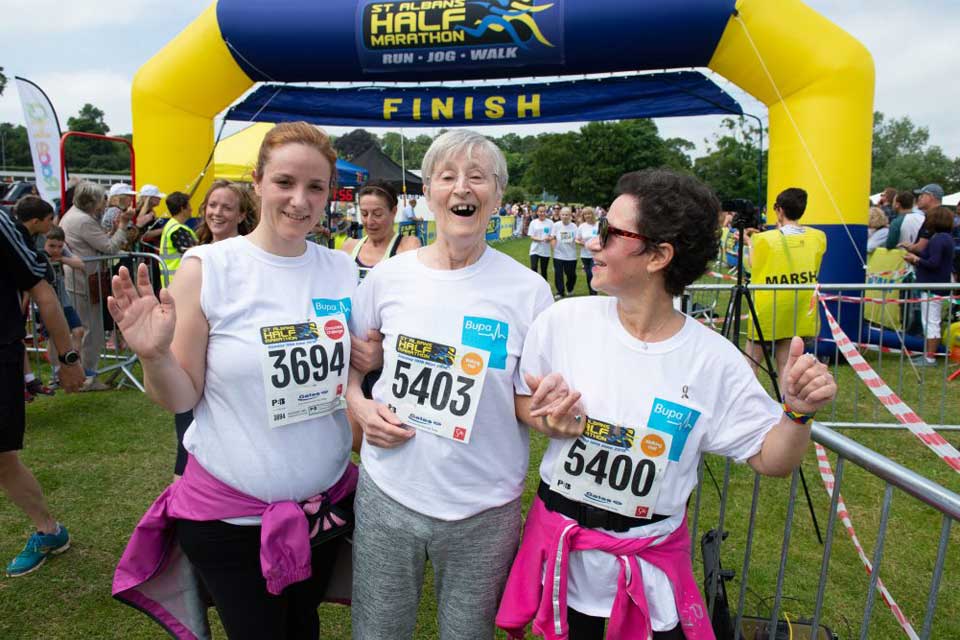 Kind-hearted care home staff helped Elizabeth Barber cross the finishing line of a half marathon – two years after the keen runner was told she would never walk again.

Sporty Elizabeth, 72, suffered a life-changing stroke at her home in August 2016, leaving her paralysed and unable to speak.

But after extensive treatment at a Bupa care home in St Albans, Elizabeth began to slowly regain her strength, co-ordination and mental aptitude.

Super-fit before the stroke, Elizabeth had completed four marathons – taking part in her first aged 58 – but it was only while helping Elizabeth through her recovery that the nurses realised her love of running.

On learning this, the team of nurses from Bupa Tenterden House agreed to walk the St. Albans Half Marathon on Elizabeth’s behalf – and plucked her from the crowd to cross the finish line with them.

Delia Abaza, Deputy Manager for Bupa Tenterden House, said: “We’ve known Elizabeth for a long time, as she used to come and visit a friend in the home.

“After her stroke, she was in a very bad way and the doctors had said she might not be able to walk or talk again, but we knew Elizabeth was a fighter.

“She’s come such a long way in the last couple of years, and – while the route is a challenge for us – we’re all so happy to be taking part and help Elizabeth cross that line.”

After collecting her medal, Elizabeth, who used to run a music shop in St Albans, said: ‘’It was an incredible feeling. I honestly could not imagine crossing a finish line again, and it is only thanks to Delia and the girls that I did it. After my stroke I was just lucky to be alive. When it began to dawn on me I wouldn’t complete another race, I was devastated.

“The support of the nurses here has always been fantastic, but now they are quite literally going the extra mile. Running was such a big part of my life, and so to have the thrill of crossing a finish line once again is really special.”