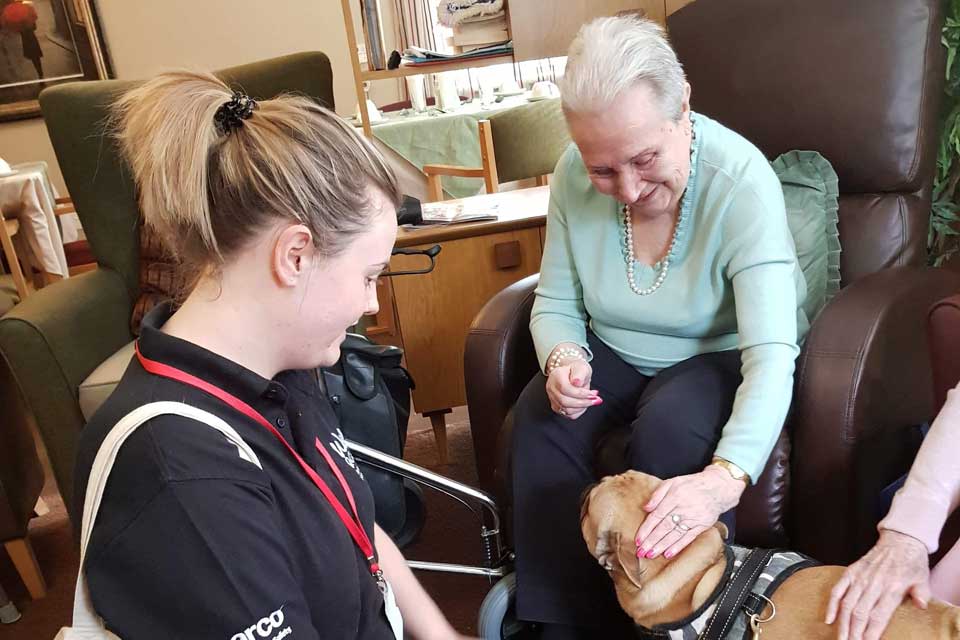 Rabbits, dogs, cats and even ponies should be welcomed at residential and dementia care homes.

That’s the view of care provider Craig Healthcare, which has integrated interactions with animals into its personalised care programmes.

Residents at its Cramlington House and West Farm sites have been provided with proactive animal-assisted initiatives which demonstrate the affirmative role animal therapy has in elderly care.

Lucy Craig, Managing Director at Craig Healthcare, said: “Animals play such an important part in residents’ lives day in, day out. At Cramlington House, we have our resident pet rabbits, Jack and Irene, who make such a positive impact on residents. One resident in particular has responded incredibly well to the rabbits, developing a close bond with them and spending time caring for them, which has genuinely made him more relaxed and happier.”

“In another example, a resident’s wife recently bought a puppy as she felt lonely following her husband’s move into Cramlington House. Oscar has not only provided great company to the spouse outside of the home, but he is also often at the home, visiting the resident and spending time with us all, sometimes getting up to mischief in the office! This has greatly helped the resident settle in well and continue his close relationship with his wife. Oscar is always such a joy to be around!”

The company says research shows regular interaction with animals is a key intervention within care homes that can improve the overall wellbeing of residents – physical and mental.

For example, interacting with animal can help in lowering blood pressure, relieving pain, reducing anxiety and engage residents in therapeutic activities such as feeding, grooming and stroking. Evidence shows that even the most solitary and sedentary residents have shown distinct improvements during the time specific pets have been present.

Craig continued: “We also have regular visits from local specialist businesses who bring in animals, including the more traditional pets like cats and dogs but also some non-traditional animals such as lizards, snakes, spiders and ponies! Interaction with a range of animals, we find, massively boosts the confidence, self-esteem and social skills of our residents and, of course, brings a smile to everyone’s faces. It really is wonderful to see, and the benefits it brings to the residents last long after the animals have left.”

Recently, a blind Shetland pony visited to meet several residents including those who struggle to communicate and interact. Craig says Smurf had an big impact, with residents able to stroke, pet and speak to him which really helped to bring them out of their shell.

Craig explained: “It was incredible to watch the effect Smurf had on the residents, who have varying care needs. His presence, demeanour and interaction really did lift their spirits, encouraged them to engage with others and created a lovely atmosphere within the home long after Smurf went back home with his owner, Lisa Walker who runs Mini Pony Hire.”

Other local businesses involved include Wag and Co, who bring several canine friends with them to interact with residents at Cramlington House every Thursday.

West Farm also receive a weekly visit from the local veterinary, Metrovets. Veterinary nurse Ginny Burn even brings her own dog, Archie into the home to meet and greet those living there. The dogs who visit are often dementia friendly too and have received the relevant training to interact with residents with dementia, which is really helpful.

Craig Healthcare has also arranged a Mini Pony Hire on Monday 18th February where some ponies will be coming to meet and greet residents, in an event where residents’ family and friends and those within the local community are encouraged to attend.