CAREERS IN CARE: Cosmin Lemnaru’s journey from Romania to Regional Director at MMCG 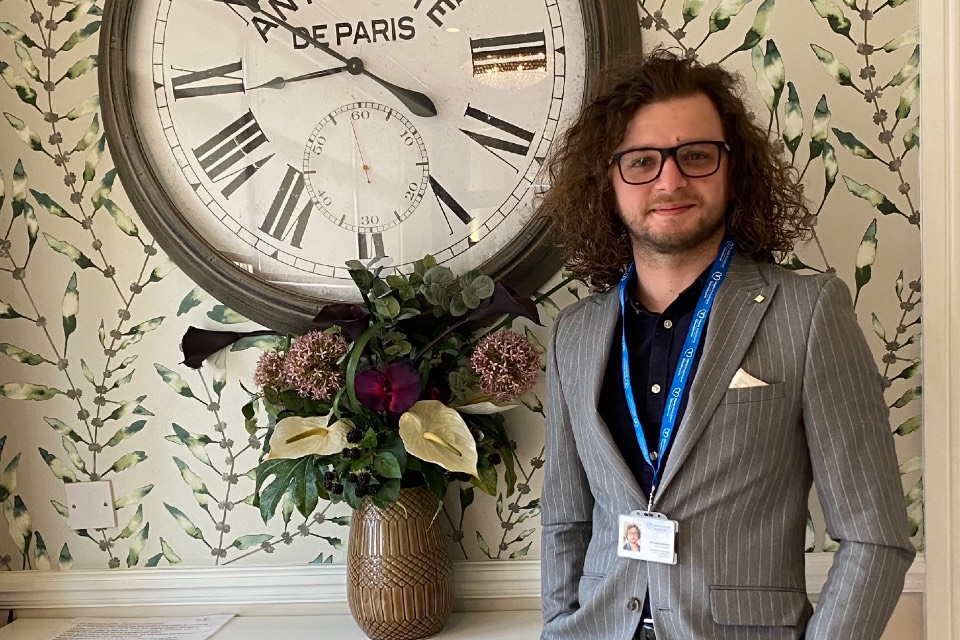 Due to the ever-increasing elderly population in the UK, the care home sector is currently poised for a tremendous transformation. With this rapid growth comes boundless opportunities for those looking to begin or develop their career in the industry. Many who choose to work in a care home relish the opportunity to learn, progress and to take on greater responsibilities and challenges. One such individual is Cosmin Lemnaru, Regional Director at Maria Mallaband Care Group…

After moving to England from Romania in October 2014, he began as a Care Assistant at Cedar Court, Cranleigh under its previous ownership. From there, Cosmin’s rapid rise through the ranks began. He soon became a team leader before fulfilling the requirements to become a Registered Nurse, then progressed further into a clinical lead position. Finally, he became a Deputy Manager in 2016, before Maria Mallaband Care Group took over Cedar Court that October.

Cosmin recalls his first memories of meeting Vicky Craddock, MMCG’s Operations Director (current Chief Operating Officer), when she came to visit the home before it was purchased. A few months later, it was announced that Cedar Court was to join Maria Mallaband Care Group. Recognising the skills and abilities of the existing team, the group retained the entire team, among those – Cosmin.

The ambition to lead

Despite Cosmin’s already impressive career progression within the home, with MMCG at the helm he was able to be far more involved with the day-to-day management, much to his delight. During those first few months as Deputy Manager, Cosmin received plenty of support and additional on-the-job training from MMCG, so when the incumbent Manager of Cedar Court relocated in January 2017, Cosmin became the permanent registered manager in May 2017.

His passion and drive for the job were clear, and during a visit shortly after, the Clinical Director recognised Cosmin’s potential for Senior Management. In March 2017, he was offered an interview with the Regional Director and Quality and Compliance Inspector to assume the role on a permanent basis. He remembers the long wait, agonisingly anticipating whether he had been accepted for the role he yearned for. As it turned out – the wait was worth it.

In January 2020 whilst managing a second care home in Northampton, Cosmin learnt of a vacant position for a Regional Director. Whilst he was unsuccessful on that occasion, MMCG were keen that he wouldn’t be deterred. Although he wasn’t yet ready for the role at that time, he was given invaluable guidance that would enable Cosmin to equip himself with the skills and knowledge to become a Regional Director in the future. This advice proved to be exactly what was needed and is a prime example of how supportive the leadership and management team are to their staff at Maria Mallaband Care Group.

In the meantime, Cosmin successfully applied for a role as Quality and Compliance Inspector. This afforded him invaluable multi-site experience and so he soon learnt how to organise his work across 11 homes, a challenge he had not faced before. Alongside this role, Cosmin also maintained a second position as Manager within one of those homes.

The reward of perseverance

At the beginning of the pandemic in spring 2020, Cosmin had only just begun his role as QCI and was grateful to receive what he calls “tremendous support” throughout. During a year of uncertainty, Cosmin persevered to achieve his dreams, despite even having the virus himself. As a result of his ambition and dedication, as well as the unwavering support from MMCG, Cosmin has now been a Regional Director from November 2020 and is responsible for a total of nine homes across the South.

Although times are difficult for all, the team at MMCG strive to lift each other up and be there for one another, offering support and boosting morale. As one of the youngest Regional Directors in the group, Cosmin is honoured that the company have put so much trust into him.

Support and training at MMCG

From the moment he became part of the MMCG team, Cosmin has enjoyed a rollercoaster of a journey, with a guiding hand every step of the way. Whilst particularly valuable during those first few months of change, Cosmin is thankful that Maria Mallaband Care Group has offered support, training and countless opportunities to further his own development throughout his career. This incredible support and guidance have taken Cosmin from Deputy Manager to Regional Director in just a few short years.

Cosmin has always had access to formal training to bridge the gap between existing and required knowledge and enable him to achieve his dreams. Even now, he is studying for a Postgraduate Diploma in Health and Social Care Management and a Level 7 diploma in Executive Management with Cambridge Management and Leadership School. This qualification is fully supported by Maria Mallaband.

Cosmin can’t pinpoint just one single thing that he enjoys about Maria Mallaband Care Group. When pressed, he certainly feels his views are valued and he is afforded the freedom to speak his mind. If any member of staff ever has a challenge, an open-door policy ensures there is always someone available for advice and guidance. Being a regional director can be a lonely job, but Cosmin doesn’t ever feel alone. He truly feels that every member of staff is there for each other as a team, or even as a family. Even in the tough times, someone has always been ‘in his corner’ and he continues to feel appreciated for the work he does.

MMCG believes in nurturing employees to climb the ladder and goes the extra mile to develop and retain great people within the company. Managers and Directors look beyond experience and recognises dedication, performance and potential. This approach has encouraged Cosmin and many others to dream bigger, put themselves forward and achieve great things.